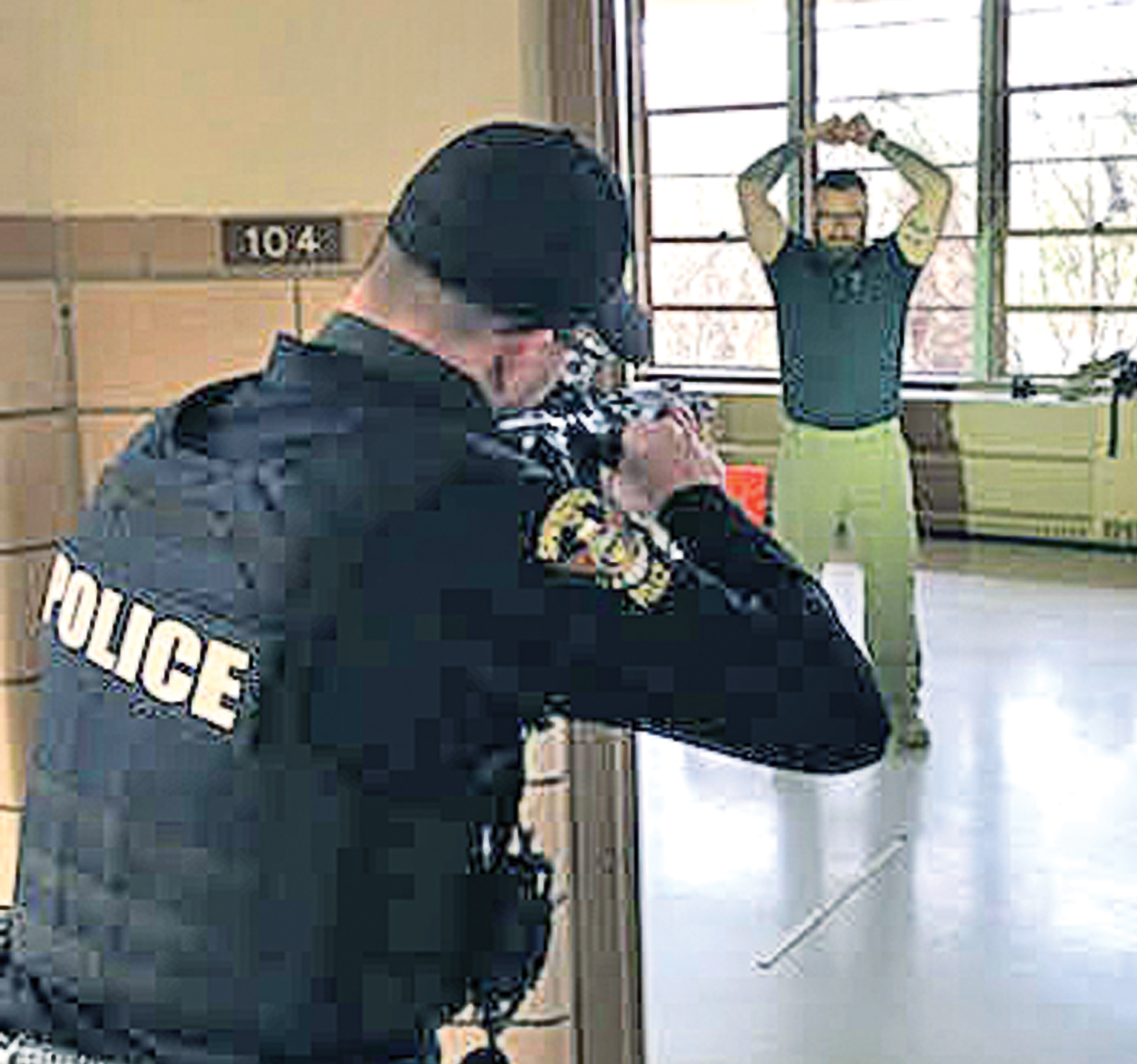 SPRINGFIELD — Officers from the Springfield and Lakemore Police Departments took part in a training exercise at the old Young Elementary School building March 22-24 that attendees hope they never have to put to the test.
“We have several schools in the township and this could be a situation all the way – but I hope not,” said Springfield Township Police Department Captain Denise Moore of the training program presented by members of the Metro SWAT (Special Weapons and Tactics) team. . “This is the first time we have specific active shooter training.”
Metro SWAT Deputy Commander Lt. Ryan Gaydosh of the Kent Police Department was one of the trainers. Others included Metro SWAT members and officers Chris Cruise, Aurora Police Department; Don Worley of the Hudson Police Department; Max Bacher, from the Macedonian Police Department; and Metro SWAT Commander Joseph Gaffney, a Springfield Township Police Department sergeant.
Gaffney said the Metro SWAT team is made up of 25 tactical officers, six negotiators and six firefighters, all from Summit and Portage counties, as well as a team doctor from University Hospitals.
Gaydosh said active shooter training such as this presentation is often the first time patrol officers are faced with a “force on force” situation.
“We use ‘sim rounds’ [simulated munitions for nonlethal training] – something akin to high-velocity paintball bullets – which allow [participants] shoot at a live target,” he said.
Moore added that the realistic training exercise is also beneficial for officers responding to burglaries and other situations where a “building sweep” is needed.
Springfield Township Police Chief Jack Simone said the training opportunity created an environment as close to a real-life crisis situation as possible.
“The fictitious formations [demonstrate] for police officers and first responders in Springfield and Lakemore how to respond to a threat situation at our local schools and elsewhere,” he said. “Exercises focus on the initial patrollers’ response in an environment as close as possible to a real-life situation they may face during a crisis.”
Simone said being able to use the Young Elementary building for training also allowed Springfield’s 18 officers and Lakemore’s eight officers to train together. This is important, he said, because neighboring agencies often answer calls together.
Gaffney said the first day of training consisted mostly of classroom work, including case law reviews and paper target scenarios to identify threat or non-threat. On the second day, participants learned how to properly enter a room, identify an active shooter with hostages, and eliminate the threat.
“We teach them to multitask,” Gaffney said. “How to identify the threat while moving towards the source. As SWAT members, that’s basically what we do, but in active shooter situations, the patrollers are usually the first on the scene. An average patroller is used to responding to calls like a damaged mailbox or a shoplifter, then [with an active-shooter incident] they are thrust into the most difficult situation they will ever face.
During the practical portion of the training, officers fired at the shooter, played by Gaydosh, while engaging him, Gaffney said.
“And the shooter still has hostages,” he added.
After the different scenarios, the participants came together to both take stock of their own reactions with the trainers and make suggestions.
Springfield Police Officer Billie Laurenti said this was his first experience of active shooter training.
“This formation is totally different from what we are used to,” Laurenti said. “It’s a high-risk situation you’re getting into.”
Springfield officer Jen Deaton, who said she had attended similar training courses, noted that the simulated scenarios were very realistic and applicable to a number of situations beyond that of an active shooter incident. .
“It’s really beneficial. The training covers many areas, such as different [weapons] door and muzzle discipline,” she said. “And it’s convenient; if you get hit in a sim round, it hurts.

Please support Leader Publications as we continue to provide the community with local news.

Click on the link below for more information on our 2020 voluntary subscription campaign!