They didn’t just come from all over Missouri, as scouts traveled to the event from Arkansas, Illinois, Indiana, Iowa, Kansas and Texas, according to the coordinator of the event Debbie Backes, who is chair of the Troop 17 committee.

Many camped at the Linn Lions Club fairgrounds, across the freeway from campus.

Comparatively speaking, when the event started two decades ago, it was small — serving only about 100 scouts, Backes said. It hosted more than 500 people at times, she added.

The pandemic has knocked the numbers down a bit, but organizers are happy with the turnout, Backes said.

“It was always intended as a place for kids to come in and earn merit badges,” she said. “We’re just giving kids who can’t get some of these merit badges a chance to get them.”

Not all Scouts involved have the opportunity to earn badges in special areas, such as robotics, photography, welding or others, she continued.

“I was just talking to aviation (instructor) and he said he once had a kid who took the aviation badge, and he made a career out of it,” Backes said.

Scouts filled the halls of the college’s information technology center. In one room, they divided into teams and built Lego robots. Ray Johnson, 11, of the Greater St. Louis Area Council and Mason Baumgartner, 12, of Fulton, rushed to build a Lego robot late Saturday afternoon. Baumgartner studied the instructions and announced to a nearby instructor that he thought a part was missing.

A volunteer instructor, Caroline Ma, 17, of Columbia, stood with the boys and encouraged them. She and other members of Army Ants, a high school robotics competition team from Columbia, brought the robots to the event to give the scouts hands-on experience. The team is associated with FIRST, a robotics community that prepares young people for the future through a suite of team-based robotics programs, according to https://www.firstinspires.org.

Science, technology, engineering and math (STEM) is obviously very important for teenagers who want a career in robotics, Ma said.

“We just wanted to spread STEM. I think the next closest FIRST team is in Wentzville,” she said. “We’re kind of trying to inspire kids to get more into engineering. And, of course, we want to help them earn their merit badges.”

Johnson said his father was a computer coder.

The robotics course had no prerequisites. However, many Saturday merit badge courses have done so.

For example, the Emergency Preparedness Merit Badge required Scouts to complete the First Aid Merit Badge, create a family plan, and bring that plan to college. Scouts also needed to know the names of their community’s director of emergency management, sheriff or police chief, and director of emergency medical services. The class asked them to bring personal emergency kits, a suitcase or waterproof box used as a family kit, and a photo showing what’s inside.

Scouts seeking the welding badge on Saturday were required to wear a uniform for the opening ceremony, but bring jeans and closed shoes to wear during the course. No shorts or open-toed shoes were allowed.

Scouts seeking the Aviation Badge had to bring a signed consent from the Guide to Safe Scouting activity and parental approval, so they could fly in a single-engine aircraft. They also had to complete a workbook during the day.

These scouts had a full day, went over pre-flight checklists for pilots and airplanes, made toy airplanes out of polystyrene sheets, and completed brief flights in a Cessna.

Linn’s Holly Kliethermes watched her 11-year-old son Elijah and two other scouts (all passengers) take off in the Cessna.

One of the reasons Elijah took the Aviation Badge instruction was because the family was getting ready to go on vacation and he had some anxiety about flying.

Elijah had been very nervous about aviation training for the past few weeks, she said.

“Not two minutes before the end of his flight,” she said, “he texted me, ‘This is really fun.'”

Hundreds of Boy Scouts gather at the 21st Annual College of Merit Badge on Saturday, July 23, 2022, at the State Technical College of Missouri in Linn, Mo. From left to right, Ben Gouge, Troop 62, Levi Richards, Troop 54 and Colin Mulchek, Troop 496, listen to JB Wagoner list the parts of the plane. (Kate Cassady/News Tribune) 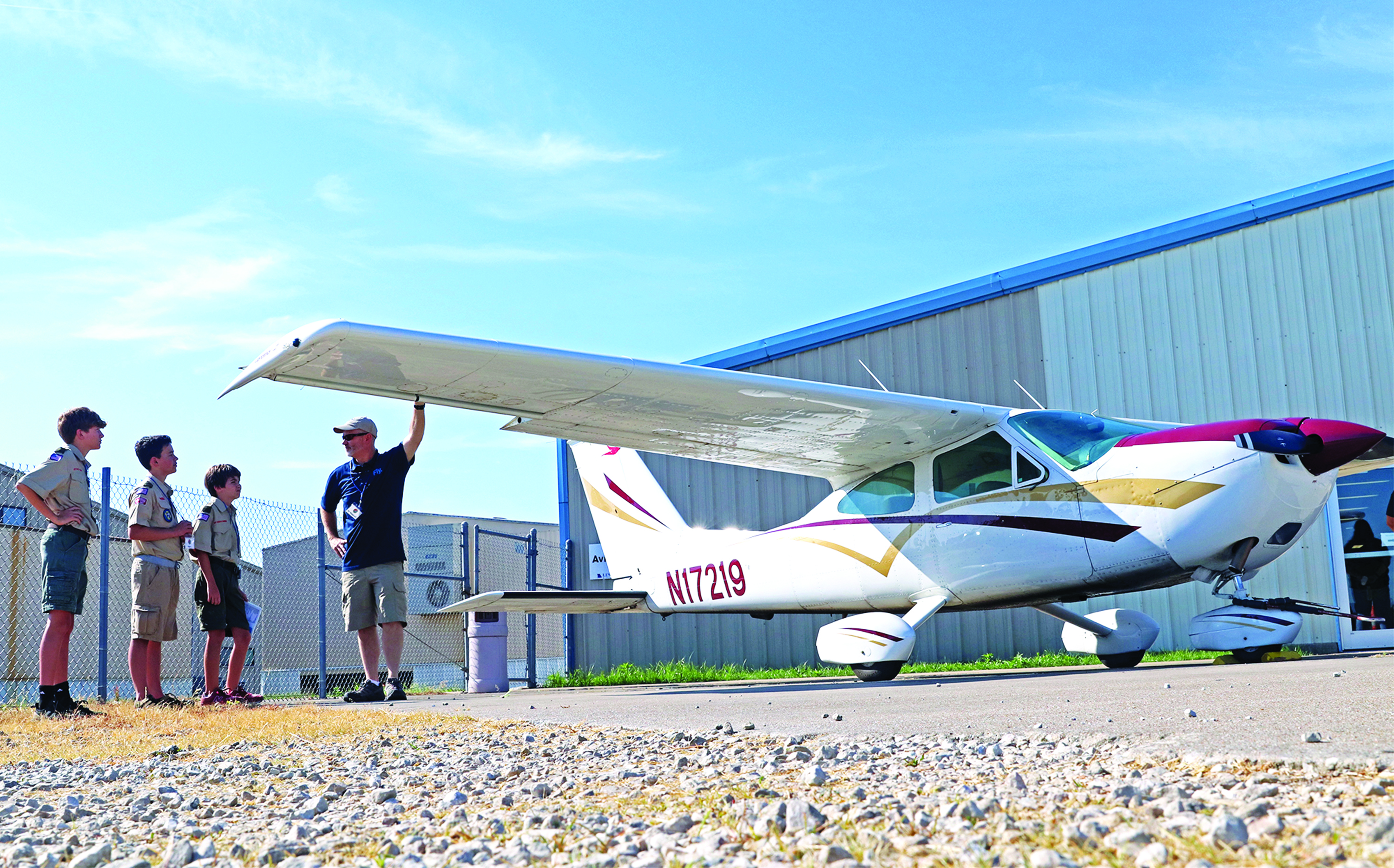 Hundreds of Boy Scouts gather at the 21st Annual College of Merit Badge on Saturday, July 23, 2022, at the State Technical College of Missouri in Linn, Mo. From left to right, Ben Gouge, Troop 62, Levi Richards, Troop 54 and Colin Mulchek, Troop 496, listen to JB Wagoner list the parts of the plane. (Kate Cassady/News Tribune)

Registration for fall recreational activities will begin on August 15